March Pop-Up Newsletter What a month! I love Autumn but it seemed to arrive too quickly. A little trip to Tasmania has distracted me and my arts news is arriving late in the month, but here it is and plenty to see…
_________________
ON NOW IN SYDNEY
Until Sunday 22 March…
Louise Whelan. African Australians 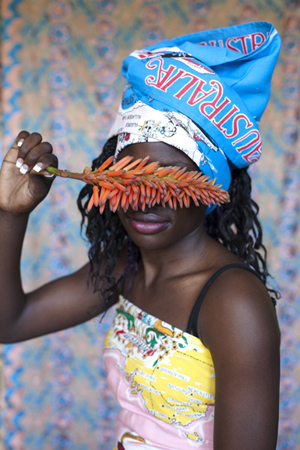 If you haven’t been to see this one then you are missing out! Vibrant African colour palettes, patterned with Australian suburbia and the surrounding landscape. Louise photographs her subjects confident with bold colour and style, posing proudly, identifying with both African and Australian culture. Customs House is a real Sydney gem and and one the city’s most beautiful free spaces. And you can borrow books too!
FREE Open
Customs House, 31 Alfred Street, Circular Quay
www.sydneycustomshouse.com.au
Website for Louise Whelan www.australiansall.photoshelter.com 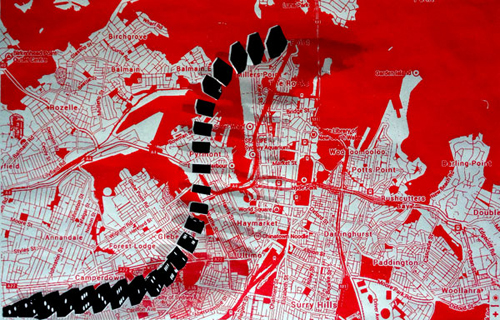 ​​Renowned print makers and teachers, Alder & Graff make a statement of support for the communities in Millers Point, Dawes Point and The Rocks struggling to save their homes. It’s now one year ago that the State Government announced it would sell off all public housing in these areas. Their poster and stencil works are provocative, political and persuasive. This show contributes to Future Feminist Archive as part of the 40th Anniversary of International Women’s Year. Check out the website for Lectures and Talks as part of the Program.
F​REE ​
Thurs-Sat 11am-6pm (close 5pm Sat)​
T​he Cross Art Projects, 8 Llankelly Place, Kings Cross​
http://crossart.com.au/home/index.php/current-show/272-some-posters-positions-for-future-feminist-archive

​Photographer​ Asher Milgate returns to the town he grew up in, Wellington, NSW, to document the life of the traditional owners, the Binjang people of the Wiradjuri nation. …Survivors… records stories from Wellington’s elders – and elders in waiting – about life at Nanima, the Common and on the outskirts of town. In 1832 the first inland Aboriginal mission was established in Wellington, which became the Nanima Mission in 1910. The mission became the longest continually operating Aboriginal reserve in Australia. The elders of Wellington shared with Asher some of their most intimate memories; tales of their families, of love, regret, hope and hardship.
It’s time for a road trip to Dubbo…
FREE Open Wed-Mon 10am-4pm
Western Plains Cultural Centre, Dubbo
http://www.westernplainsculturalcentre.org/#!current-exhibitions/

IF YOU HAPPEN TO BE IN ST. LOUIS, USA… 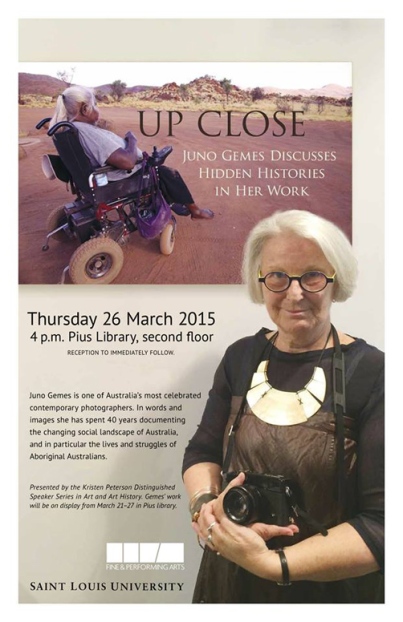 Juno has been invited by the University of St. Louis to exhibit a collection of her work and to Lecture as part of the Kristen Peterson Distinguished Speaker Series in Art and Art History.  What an opportunity if any of you happen to be in the neighbourhood.  Juno is a much distinguished Australian photographer, well known for her documentation of the changing social landscape over the last 40 years, with emphasis on Aboriginal Australians.  She has currently been touring the US with her husband, acclaimed poet Robert Adamson, who has also been giving a series of readings from his latest published collection, Net Needle.
FREE Open to the Public
​Pius XII Memorial Library, St. Louis University, St. Louis, USA
www.slu.edu/department-of-fine-and-performing-arts-home/programs-of-study/art-history/

FOR YOUR APRIL ARTS DIARY…

Coloured pencil and ink, drawings from the production, Grandma’s Shoes, by Kim Carpenter

​
After 25 years, Kim Carpenter, the Director of Theatre of Image has emptied his draws of the most delightful collection of coloured pencil drawings and watercolours.  Costume designs, set designs and ideas on paper from eleven different productions, including a selection from Monkey…Journey to the West  (Opening Sydney Opera House 4 April).  Put this one in your April Diary because it will be a total pleasure. For everyone – children and adults.  Playful, colourful, whimsical, gorgeous. How many theatre directors do you know that can actually draw?

Poster for The Affair – TV Series

Starring Ruth Wilson (Luther) and Dominic West (The Wire; The Hour), The Affair had me gripped from the first episode. Perhaps a weaker ending than it should have been and not sure how a second season will play out, but this was a solid series.  Told from both perspectives of the relationship within each episode, there are plenty of unpredictable plot twists.  Clever in that you care for almost each character, especially all the ones that matter.  I also loved where it was filmed – between New York, Brooklyn and Montauk (Long Island).  Compelling, complex and sexy.
​REVIEW​  www.news.com.au/entertainment/tv/the-affair-tv-show